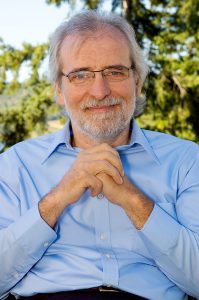 Gary Holz, D.Sc., was an award-winning physicist, multiple patent holder and worked in the high-tech aerospace industry in the early years of his life.

Diagnosed with progressive Multiple Sclerosis in 1983, the globe-trotting physicist eventually became a quadriplegic, with limited movement and little feeling throughout his body.

Upon learning in 1994 that he had less than two years to live due to MS complications, Gary was led by a series of serendipitous events into the untouched world of a remote Outback aboriginal tribe.

It would change his life and belief system forever.

Although Gary’s trip into the desert village was in a wheelchair as a quadriplegic numb from the neck down, his return flight back to the States less than two weeks later was dramatically different.

Transformed in body, mind and spirit, Gary now had feeling throughout his entire body and increased mobility.

With assistance from a Higher Consciousness they called the "Big Guy," the Aboriginal tribespeople had sent restorative energies to the scientist, healing him and helping him discover his own gift for healing others.

At the tribe’s request, Dr. Holz reveals their powerful medicine in the multiple award-winning book, Secrets of Aboriginal Healing: A Physicist's Journey with a Remote Australian Tribe.

Read in over 43 countries, this compelling true story of Gary's healing journey also offers a rare glimpse inside the mystic life of remote Australian Aboriginal tribespeople and their 60,000-year-old healing principles.

Working as a husband and wife team, he and his wife Robbie Holz helped many people successfully restore wellness from illnesses such as fibromyalgia, cancer and arthritis.

These amazing experiences are chronicled in the fascinating award-winning sequel, Aboriginal Secrets of Awakening: A Journey of Healing and Spirituality with a Remote Australian Tribe.

Gary dedicated the remainder of his life to using and teaching the Aboriginal healing techniques to enrich many lives.

Contact us to learn how to restore your health starting today.